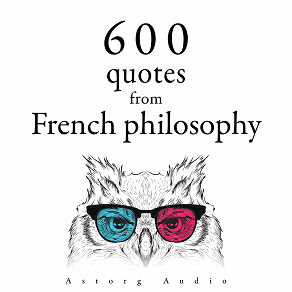 by Jean-Jacques Rousseau ‚ Denis Diderot ‚ Voltaire ‚ Blaise Pascal ‚ Montesquieu ‚ Gaston Bachelard
‘600 Quotations from French Philosophy’ is a collection of thoughts and reflections from six of the greatest French thinkers of all time.

France’s influence on Western philosophy cannot be understated, from the Age of Enlightenment through to the founding of modern philosophy.

Many of these quotes have as much resonance today as they did when they were first coined.

Superb for dipping in and out of, there are more than a few thoughts in this book worth memorising, and even more that are sure to inspire.

Montesquieu (1689 – 1755) was born in Aquitaine, and his writing had a huge influence on political systems. Voltaire (1694 – 1778), a Parisian, was one of the founders of the French Enlightenment movement. Born in Langres, Denis Diderot (1713 – 1784) was a writer and another important figure in the Age of Enlightenment.

Gaston Bachelard (1884 – 1962) was born in Bar-sur-Aube and went on to become an important scientific philosopher. Born in Geneva, Jean-Jacques Rousseau (1712 – 1778) was a spearhead in the European Enlightenment movement. Blaise Pascal (1623 – 1662) was born in Clermont-Ferrand and is best remembered as a fideistic philosopher.
Listen to sample
Log in to borrow