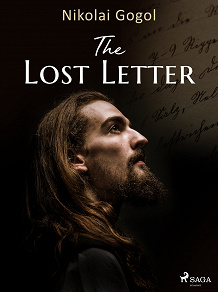 by Nikolai Gogol
"The Lost Letter" is a short story by Gogol published in his 1831 collection "Evenings on a Farm Near Dikanka". In it, an exuberant narrator, the old sexton Foma, humorously recounts the story about his grandfather's adventures. Assigned with the task of delivering an important letter to the Russian Czarina, the old man sets to a journey in which he encounters a Cossack man who claims to have sold his soul to the devil. That night, a demon steals the old man’s hat with the letter tucked inside. Determined to fulfill his duty, the old man has to go through different obstacles that stand on his way. But will his determination make him enter the Hell itself?

The story has numerous adaptations, among which an animated film of the same name (1945) directed by Brumberg sisters, which is considered the first Soviet cel-animated feature film, and the Soviet musical-tragicomedy film Propala Hramota (1972) which is praised as the pearl of Ukrainian cinema.

Nikolai Gogol (1809-1852) was a Ukrainian-born Russian humorist, novelist, and dramatist whose work played a crucial role in the direction of Russian literature. He was considered to be one of the leading figures of Russian realism. His novel "Dead Souls", a satire of the political corruption in the Russian Empire, is viewed by many literary historians as the first great Russian novel. Among his contributions to Russian and world literature are the surrealistic and grotesque "The Nose" and "The Mantle", the satirical "The Inspector General", the historical novel "Taras Bulba", the comedy "Marriage", the humorous short stories "Diary of a Madman" and "The Tale of How Ivan Ivanovich Quarreled with Ivan Nikiforovich". His works have influenced generations of readers and still continue to impress with their subtle psychologism and matchless style.