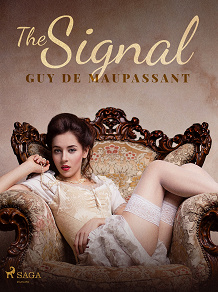 by Guy de Maupassant
When the Baronne de Grangerie attempts to imitate the gestures of a woman in the window on the opposite side of the street, she gets much more than she bargained for. Will she make her next move based on her sensual appetites, or will her conscience prevail? With his short story "The Signal" from 1886, Guy de Maupassant conveys the little dramas and daily preoccupations of the rich and bored bourgeois. Maupassant himself was famously fascinated with lower class women and prostitution – but with "The Signal", he ironically moves the brothel to the boudoir in a clash of social class.

Guy de Maupassant (1850-1893) was a famous French writer, best known as one of the finest practitioners of the French short story. Master of style and dramatic narrative, Maupassant’s stories are mainly interested in the relationships between men and women, often found at the crossroads of life. One of his greatest influences was Gustave Flaubert, who introduced him to some of the central names of the time such as Emile Zola, Henry James, and Ivan Turgenev. Some of his best known works include the novels "Bel Ami" and "Une Vie", more than 300 short stories, travel books, and even an attempt at poetry.