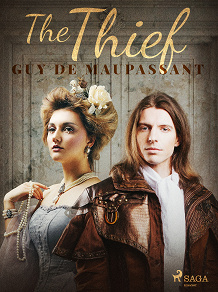 by Guy de Maupassant
"The Thief" tells the tragic story of a soldier enamoured with life and with a girl as disquieting and wayward as she is beautiful.

Through masterful storytelling within a story, Guy de Maupassant portrays a fiery and passionate romance, initiated in secrecy and heartbreakingly brought to light, when on one dark, fateful evening, the soldier is mistaken for a thief.

With "The Thief", Maupassant calls upon the reader to question the nature of crime, the appropriateness of juridical punishment in nineteenth-century France, and the willingness to sacrifice everything in the name of love.

Guy de Maupassant (1850-1893) was a famous French writer, best known as one of the finest practitioners of the short story. Master of style and dramatic narrative, Maupassant’s stories mainly focus on the relationships between men and women, often found at the crossroads of life. One of his greatest influences was Gustave Flaubert, who introduced him to some of the central names of the time such as Emile Zola, Henry James, and Ivan Turgenev. Some of his best-known works include the novels "Bel Ami" and "Une Vie", more than 300 short stories, travel books, and even an attempt at poetry.