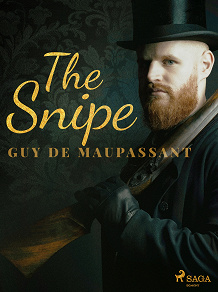 by Guy de Maupassant
A stroke of paralysis has left Baron des Ravots crippled, but thanks to the toil and dedication of his dutiful servants, he can still entertain guests and hunt birds with great success. With "The Snipe", Guy de Maupassant offers an exploration of the relationship between master and servant in a society dominated by large social class differences. By satirizing the everyday life of a rich bourgeois, Maupassant skillfully exposes the shallow values and preoccupations of the French upper class.

Guy de Maupassant (1850-1893) was a famous French writer, best known as one of the finest practitioners of the short story. Master of style and dramatic narrative, Maupassant’s stories are mainly interested in the relationships between men and women, often found at the crossroads of life. One of his greatest influences was Gustave Flaubert, who introduced him to some of the central names of the time such as Emile Zola, Henry James, and Ivan Turgenev. Some of his best known works include the novels "Bel Ami" and "Une Vie", more than 300 short stories, travel books, and even an attempt at poetry.