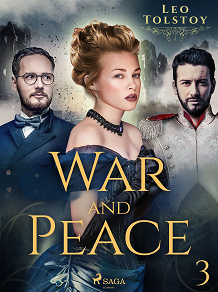 by Leo Tolstoy
The third quarter of 'War and Peace' is where the rubber really hits the road (or the cannonballs hit the walls).
The story centres on one of history's most famous periods, Napoleon's March on Moscow.
The leading characters are involved in plotting Russia's tactics, fighting on the front - or guarding their estates against the expected overrunning by French soldiers.
Tolstoy evocatively describes the futile slaughter of war, in some of literature's most dramatic chapters ever written. He also brings Napoleon to life as he arrows in on the famous general.
At the end of the Battle of Borodino, two of the main characters are missing, presumed dead. It is a real cliffhanger for 'War and Peace IV'.
Leo Tolstoy's masterpiece is a complete semester of Russian and French history, using the zoom button to focus on its impact on families from the aristocracy to the peasants.
It paints a picture of petty jealousy, pride and forbidden love in the Russian stately homes.
If you like costume dramas and the novels of Jane Austen ('Pride and Prejudice', 'Sense and Sensibility'), this is the granddaddy of them all. The same goes for fans of Bernard Cornwell's 'Sharpe' novels and TV series', starring Sean Bean.
'War and Peace' was made into a BBC TV series in 2016, written by Andrew Davies and starring Lily James and James Norton.


Leo Tolstoy (1828-1910) was a Russian author, a master of realistic fiction and one of the world’s greatest novelists. Tolstoy’s major works include 'War and Peace' (1865–69) and 'Anna Karenina' (1875–77), two of the greatest novels of all time and pinnacles of realist fiction. Beyond novels, he wrote many short stories and later in life also essays and plays.
In the years following the publication of 'War and Peace' Tolstoy - who was born to a Russian aristocratic family - had a spiritual awakening that made him a committed Christian anarchist and pacifist. His philosophy inspired Mahatma Gandhi and Martin Luther King Jr.