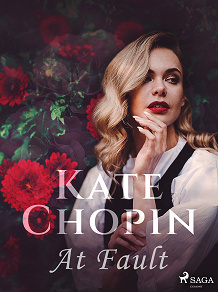 by Kate Chopin
Divorce, adultery, murder, female alcoholism, racism, civil war, arson, drowning, marriage dominated by hate and marriage filled with love. Is there anything left that this book doesn’t deal with?<br><br>Therese finds herself a widow at a young age and is in charge of a plantation in Louisiana. She meets Hossmer, a handsome businessman, who runs the mill. A decision is made that will have a lasting and detrimental effect.<br><br>Racial tensions, Catholic beliefs as the basis of a moral dilemma, the boredom of a young woman with little to do with her time and the devastating effects of drink as well as the tragedy caused by mother nature. 'At Fault' will be a big hit with fans of Kate Chopin’s work and for anyone with a love for the classics.<br><br>Kate Chopin (1850-1904), born Katherine O’Flaherty, was an American writer of novels and short stories mostly set in the 19th-century American South. Her works deal with themes of the female psyche and women's limited life opportunities in the Victorian era, often in a naturalist style. She was considered controversial in her time, but is now praised as a pioneer of 20th-century feminist American literature. <br><br>Her most famous works include the novel ‘The Awakening’ (1899), which explores themes of rebellion against femininity and motherhood at the turn of the 20th century. Adaptations of this title include 'Grand Isle' (1991) starring Kelly McGillis and Adrian Pasdar, and 'The End of August' (1981).