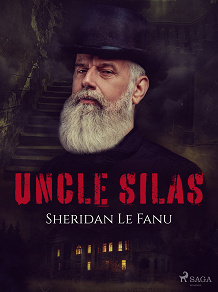 by Sheridan Le Fanu
Maud Ruthyn is just seventeen when a tragic event leaves her orphaned and sent to live with her mysterious Uncle Silas. Alone inside the walls of Bartram-Haugh, Maud soon begins to realise her uncle is not the reformed Christian he pretends to be. Knowing that her fortune will pass to him, should she die before her eighteenth birthday, Maud is petrified as rumours unfold that Silas was once a heartless murderer.
A spine-chilling tale of greed and vile intentions, ‘Uncle Silas’ is a masterpiece of Victorian Gothic horror. Sheridan Le Fanu combines the pulsing dread of works like Wilkie Collin’s ‘The Woman in White’ and Radcliffe’s ‘Mysteries of Udolpho’ into a novel that remains to this day a psychological horror that will chill you to your bones.

Joseph Thomas Sheridan Le Fanu (1814-1873) was an Irish Gothic writer of short stories and novels. One of the central names amidst the ghost-story writers of the 19th century, Le Fanu’s influence cannot be underestimated. Inspiring the likes of Bram Stoker, Le Fanu laid the basis for the Victorian Horror genre by combining realism with deeper psychological elements. His most important works include ‘Uncle Silas’, ‘Carmilla’, ‘The House by the Churchyard’, and his short story collection ‘In a Glass Darkly’.