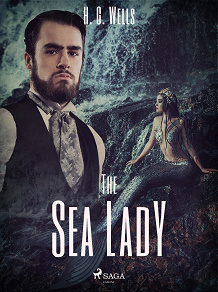 by H. G. Wells
‘The Sea Lady’ is ‘The Little Mermaid’ for grownups. Set in Folkestone, the story focuses on a mermaid who comes ashore, with the intent of seducing Harry Chatteris. Living under the name of Doris Thalassia Waters, the mermaid makes it her mission to disrupt his engagement and take Chatteris for herself. Can he withstand her charms, or will he abandon his betrothed? An exploration of the human condition and the desire to fetter our wilder natures, ‘The Sea Lady’ perfectly captures the conventions and attitudes of the time.

Herbert George Wells (1866 – 1946) was an English writer, historian, sociologist, and journalist. His interests in technology and time travel (a term he is thought to have coined), have seen him hailed as one of the pioneers of the science-fiction genre. During his career, Wells wrote over 50 novels, alongside more than 60 short stories and numerous historical and scientific papers. Many of his most famous works have been adapted for film and television, such as ‘War of the Worlds,’ starring Tom Cruise, ‘The Island of Dr Moreau,’ starring Val Kilmer, and ‘The Invisible Man,’ starring ‘Elizabeth Moss.’