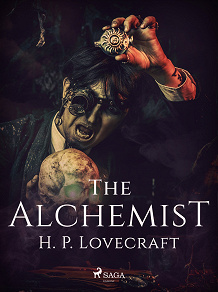 by H. P. Lovecraft
When you turn 32, you die. That’s the fate of the male descendants of the Chabrillane family who have all perished on their 32nd birthday.
The curse began over 600 years ago, the night Henri Chabrillane killed the alchemist Michel Mauvis. Michel’s son, Charles, swore revenge on Henri and his descendants and from that day forth, no male Chabrillane has ever lived to thirty-three years of age.
Now, Antoine, the Count de Chabrillane and the last of his line, is approaching his 32nd birthday. Alone in the family's crumbling castle, he must face the Chabrillane curse.
‘The Alchemist’ is a short story by American writer H. P. Lovecraft, written in 1908, when he was still a teenager and first published in 1916.


Howard Phillips Lovecraft (1890-1937) was an American author of horror, fantasy and science fiction. He is best known for his short stories of weird fiction, including ‘The Call of Cthulhu’, ‘At the Mountains of Madness’, ‘The Shadow over Innsmouth’, and ‘The Shadow Out of Time’.
Lovecraft's writing did not grant him fame or fortune during his life. He died without the acclaim his work now generates. Credited with inventing cosmic horror, he is widely regarded as one of the most influential horror writers of the 20th Century,
Inspired by the likes of Alexander Pope, Jonathan Swift, and Edgar Allan Poe, Lovecraft’s work has influenced writers and filmmakers such as Guillermo del Toro, Neil Gaiman, Thomas Ligotti and Stephen King.
H.P Lovecraft was inducted into the Museum of Pop Culture's Science Fiction and Fantasy Hall of Fame in 2016.