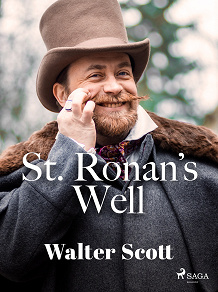 by Walter Scott
‘St. Ronan’s Well’ is a tragicomic tale of two brothers in love with the same woman. Walter Scott’s trademark dramatic tension is palpable in this novel, but it is unique in the fact that it is his only novel set during the 19th century. The story revolves around a spa in a small Scottish town that is home to a large cast of highly comedic and compelling characters. Scott expertly builds suspense over the course of the novel as each character has something to hide in this satirical village. Throughout the story, dark secrets are revealed and blackmail escalates to violent confrontation as both brothers battle for the love of Clara. ‘St. Ronan’s Well’ features some of Scott’s best characters and beautifully vivid descriptions of the Scottish countryside and its satirical style is an interesting departure from his typical historical fiction. This novel should be read by fans of Scott’s work but its luxurious setting and fusion of irony and high drama make it the perfect book for fans of ‘The White Lotus’ or ‘Nine Perfect Strangers’.

Walter Scott (1771 – 1832) was a Scottish writer, poet, and historian. Fascinated by traditional storytelling, during the 1790s Scott dedicated himself to researching and collecting ballads and published the epic collection ‘Minstrelsy of the Scottish Border’ in 1802. A prominent poet, Scott also wrote and published a range of poems, including the popular ‘The Lady of the Lake.’ His first historical novel ‘Waverley’ was published in 1814, whereupon it was an immediate success, receiving critical acclaim and selling out many printings. His best-known work ‘Ivanhoe’ followed in 1820. Scott died in 1832 at the age of 61. He was commemorated after his death with monuments in Edinburgh, Glasgow, and New York due to his impact on western literature. His literary works influenced and inspired many other great authors such as Virginia Woolf. Internationally renowned, Scott’s literary legacy continues to be felt all over the world to this day.