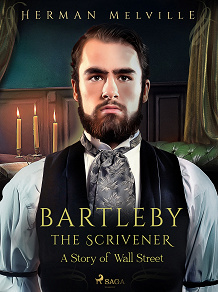 Bartleby the Scrivener, A Story of Wall Street

by Herman Melville
'Bartleby the Scrivener: A Story of Wall Street' is a short story from 1852 by Herman Melville.
Bartleby is hired to work as a scrivener alongside two other clerks, Nippers and Turkey, for an unnamed, elderly lawyer in New York. At first, he produces high-quality work but suddenly his work ethic takes a turn, and Bartleby reply to every task he is given becomes "I would prefer not to.'
The story was in part inspired by Emerson’s essay "The Transcendentalist" and has been adapted to film twice: once in 1970, starring Paul Scofield, and again in 2001, starring Crispin Glover.

Herman Melville (1819-1891) was an American writer, best known for his whaling novel, ‘Moby-Dick; or, The Whale’ (1851), which was poorly received at the time but is considered a classic today.
Melville, along with authors such as Nathaniel Hawthorne, Ralph Waldo Emerson, Henry David Thoreau and Walt Whitman, was part of the American Renaissance, a literary movement that aimed to provide literature for the American democracy.