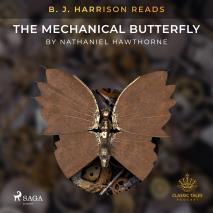 by Nathaniel Hawthorne
Owen Warland is a genius who wants to create things and break the limitations set by the society and the people surrounding him. He is deeply misunderstood and he often quits his innovative projects when people advise him to take up something more "practical". After many failed attempts to fit in, he finally breaks away from society and finds peace in nature. Will he finally get to finish the creation of his lifetime and will it all have been in vain? Find out in Nathaniel Hawthorne’s "The Mechanical Butterfly".

Nathaniel Hawthorne was an American author who lived in the period 1804-1864. He is best known as novelist and short-story writer. His literary style belongs to dark romanticism. Morality, religion, guilt and sin were topics he often took up in his stories. History, symbolism and psychology were also often intertwined in his works. To this day, he is considered to be one of the greatest fiction writers in American literature. Some of Hawthorne’s most popular novels are "The Scarlet Letter", "The House of Seven Gables" and "The Marble Faun".

B. J. Harrison started his Classic Tales Podcast back in 2007, wanting to breathe new life into classic stories. He masterfully plays with a wide array of voices and accents and has since then produced over 500 audiobooks. Now in collaboration with SAGA Egmont, his engaging narration of these famous classics is available to readers everywhere.
Listen to sample
Log in to borrow