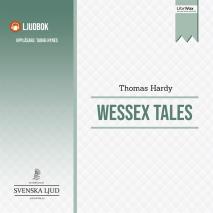 by Thomas Hardy
Wessex Tales is a collection of six short stories written by Hardy in the 1880’s. If you’ve never read Hardy they’ll serve as a good introduction to his writing. Though not as comprehensive as his major works they do contain all the ingredients that make him instantly recognisable. Thomas Hardy was an English novelist and poet. A Victorian realist, in the tradition of George Eliot, he was also influenced both in his novels and poetry by Romanticism, especially by William Wordsworth. He gained fame as the author of such novels as Far from the Madding Crowd (1874), The Mayor of Casterbridge (1886), Tess of the d'Urbervilles (1891), and Jude the Obscure (1895). The bulk of his fictional works were set in the semi-fictional region of Wessex and explored tragic characters struggling against their passions and social circumstances. Hardy's Wessex is based on the medieval Anglo-Saxon kingdom and eventually came to include the counties of Dorset, Wiltshire, Somerset, Devon, Hampshire, and much of Berkshire, in south west England.
Listen to sample
Log in to borrow