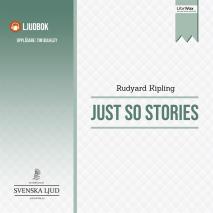 by Rudyard Kipling
The Just So Stories for Little Children are among Kipling's best known and loved works. This recording aims to be the first complete audio book of this title with nothing left out. The Nobel prize-winning author's enjoyment in playing with the sounds and meanings of words is very evident throughout, and adds to adults' enjoyment of these stories for children. This playfulness is also dramatically present in the plotting. For both reasons these stories been loved by generations of children and adults alike. Because the writing plays with sound and meaning the Just So Stories are best enjoyed when read aloud. Joseph Rudyard Kipling was an English short-story writer, poet, and novelist chiefly remembered for his tales and poems of British soldiers in India, and his tales for children. He was born in Bombay, in the Bombay Presidency of British India, and was taken by his family to England when he was five years old. Kipling is best known for his works of fiction, including The Jungle Book, Just So Stories (1902), Kim (1901) (a tale of adventure), and many short stories. Kipling was one of the most popular writers in England, in both prose and verse, in the late 19th and early 20th centuries. In 1907 he was awarded the Nobel Prize in Literature, making him the first English-language writer to receive the prize, and to date he remains its youngest recipient.
Listen to sample
Log in to borrow