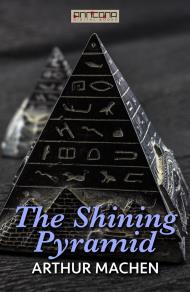 The Shining Pyramid is a short horror story by Welsh author Arthur Machen.

A tale of mystery, that blends elements of detective stories and classic horror stories in a thrilling way.

The story starts innocently enough with two men discussing strange arrangements of stones left at their doorstep. Reminding of The Adventure of the Dancing Men by Conan Doyle.

Someone finds a code near their house that may have horrific implications. The discussion between the two and their rational thinking echoes Poe's The Mysteries of the Rue Morgue.

But where Doyle's and Poe's tale concluded with a rational and natural explanation, Machen's tale turns into horror, of things dwelling deep underground and best left untouched. Machen's language effectively evokes the mystic nature of the English countryside with the more intellectual pursuits of its main protagonist.

Arthur Machen (1863-1947) was a Welsh author and mystic of the 1890s and early 20th century. He is best known for his influential supernatural, fantasy, and horror fiction. His novella "The Great God Pan" (1890; 1894) has garnered a reputation as a classic of horror (Stephen King has called it "Maybe the best [horror story] in the English language"). He is also well known for his leading role in creating the legend of the Angels of Mons.