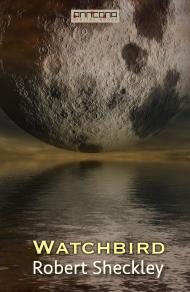 Watchbird is a science fiction novella by Robert Sheckley, first published in 1953.

Strange how often the Millennium has been at hand. The idea is peace on Earth, see, and the way to do it is by figuring out angles.

Robert Sheckley (1928-2005) was a Hugo- and Nebula-nominated American author. First published in the science fiction magazines of the 1950s, his numerous quick-witted stories and novels were famously unpredictable, absurdist and broadly comical.

Sheckley was nominated for Hugo and Nebula awards and was named Author Emeritus by the Science Fiction and Fantasy Writers of America in 2001.