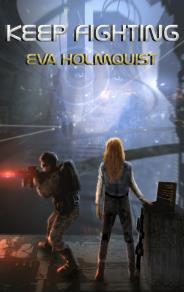 In a city full of androids – humanoid robots indistinguishable from their flesh and blood counterparts — Kate joins the resistance to fight a world ruled by machines. She wants freedom. No surveillance cameras. No random interrogations by the security forces. Then Kate stumbles on a secret that could change everything. Will she and the resistance succeed in defeating the machines, or will they die trying?

This short story has previously been published in the anthology “Waiting for the Machines to Fall Asleep”.