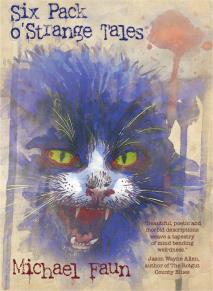 Six Pack o' Strange Tales collects six stories (four illustrated) that'll drag you over the hills of Bizarro, drown you in the river of madness, and wash your bloated corpse up on Pulp Horror beach. Are you ready to make the trip?

"The Babbitt Farm": An elderly country bumpkin buys a farm to grow a field of corn, but why does the crop taste so sinister?

"The Strange Case of Frankie Forepaws": A cat debt-collector's Boss' nephew has gone mad. Every claw soon points to one rundown factory carrying a well hidden secret; bound to ruin their corrupt city and turn its citizens insane.

"The King's Collection": A stripper with the body of a goddess but the face of a Gremlin, meets a strange man who offers her the vacation of a lifetime...

"The Gold of Molegrave Hollow": A cursed cemetery! Pesky gophers! An assiduous cemetery keep stumbles upon something he's been seeking since WWII. Can his pacemaker handle the surprise?

"The Spider Lump": In a war where giant armadillos are used as war-tanks, two armies' are standing on the threshold of the final battle for domination. Meanwhile, two hellions trespass an underground excavation in search for strange treasures-unaware their loot will vastly alter the future. Another threat has woken...

"The Deconstruction of Dreamcatching Henry": A traveling street musician, acclaimed for dreaming up his enthralling songs, flees his motel room in the middle of the night after a violent dispute with the fleabag's vexed clerk. Gallivanting the desolate streets and harbor, he ends up in a deserted boathouse where he resumes his interrupted sleep. But is it really deserted? Unsettling croaks at the door suggests otherwise...